A year from now (or maybe five), my hospital (or maybe yours) will suddenly be filled with far more patients than it can cope with. Some damned thing — a viral pandemic, an earthquake, a dirty bomb — will send 700 people into a facility with 300 beds. The building’s electricity and oxygen supply may or may not be intact. Awful triage decisions will need to be made.

In the first hours of a crisis, hospitals can perform brilliantly. Think of the way nurses ferried NICU babies down the stairs at NYU Langone in last October’s storm. But if an emergency wears on for days, sleep-deprived, dehydrated, overwhelmed clinicians will inevitably start to lose their powers of attention and compassion. If the hospital doesn’t have a robust safety culture that can counteract that cognitive decay, physicians and nurses are likely to commit follies that needlessly cost lives. 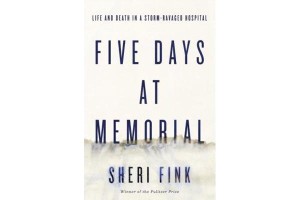 Sheri Fink’s extraordinary Five Days at Memorial revisits the aftermath of Hurricane Katrina at Memorial Medical Center in New Orleans. Forty-five patients died at Memorial in the week after the storm — far more than at any other hospital in the city, though most other facilities faced equally brutal conditions.

There is good reason to believe that at least one physician and at least two nurses injected high doses of morphine and Versed into at least a dozen Memorial patients, deliberately speeding their deaths. Many of those patients were frail and elderly. One was a paralyzed 61-year-old who was fully alert and oriented throughout the week. “So are we ready to rock and roll?” he reportedly asked a staff member on the morning of September 1, 2005, when he expected finally to be evacuated. A few hours later, he was injected with morphine — and, according to one account, smothered with a towel.

The morphine-wielding clinicians seem to have believed that many of the patients had already decompensated so badly that their deaths were imminent. Why should they suffer through a final 24 hours of pain, heat, and respiratory distress? But in most cases, the patients were barely known to the staff members who injected them; there’s no evidence that they received adequate physical assessments, much less that they were asked whether they wanted to be hastened into death.

In the least charitable reading, the clinicians simply wanted to get the hell out of the building. They had worked through three days with little electricity or air conditioning. They believed, wrongly, that too few helicopters were available to complete an evacuation in a reasonable time frame. They were exhausted, disheartened, and desperately worried about their family members, their houses, their pets. They’d heard lurid rumors of post-hurricane violence. They thought the crippled hospital might be overrun by looters at any moment. They wanted out. But of course they didn’t want to leave behind anyone alive. That would be cruel, and might open them up to charges of criminal abandonment. Easier to persuade themselves that the remaining patients were all miserable and on the brink of death. We’ll just give them a few injections to “ease their suffering.”

Or maybe that’s a badly unfair way of telling the story. As Fink makes clear, the physician and nurses who gave the injections had decades-long track records of dedication and skill. A grand jury reviewed the episode and declined to hand down any indictments. (That jury never heard from crucial witnesses, however, including Memorial physicians who had contacted prosecutors about what they had seen and heard.)

Throughout the book, Fink is meticulous about conveying the limits of what is actually known about the events. She never lapses into polemic, and she never tries to force the available facts into a tidy box. (For more on Fink’s “non-narrative narrative,” see this appreciation by Jeff Sharlet.)

Five Days at Memorial is so complex that it feels like a violation to boil it down into a clean set of lessons. But I’m going to try anyway. Here are three principles that might be drawn from the book about how to preserve patient safety in an extreme emergency. (Think of this as an IHI Open School course for the apocalypse.)

1. For God’s Sake, Know Each Other’s Names, and Talk to Each Other.

Even when Memorial had been largely evacuated and was down to a skeleton staff, not all the nurses and physicians in the building knew each other’s names or roles. I lost track of the number of times Fink mentioned one professional vaguely recognizing another in the hallway without actually knowing them. (“Thiele didn’t know Pou by name, but she looked like the physician in charge on the second floor.”)

This was partly because patients and staff members from a long-term-care facility had taken shelter at Memorial before the storm hit. But even so, it’s astonishing to read how little effort was made to share information and to build a sense of camaraderie inside the building. That atmosphere of semi-anonymity seems to have made it easier for rumors to spread and for drastic, ill-conceived plans to hatch. As Atul Gawande and his colleagues have demonstrated in their surgical-safety projects, medical staff members are much more likely to share information and to point out potential mistakes when they know one another’s names.

Across town at Charity Hospital, physical conditions were at least as bad as those at Memorial, and twice as many patients were present, but only three died. As Fink notes, this may have been partly because the staff there actively built themselves into teams. They held open meetings every four hours and worked to suppress false rumors (“you can only say it if you’ve seen it”).

2. DNR Means ‘Do Not Resuscitate’ — Not ‘I’m on the Cusp of Death, So Please Send Me to the Back of the Triage Line.’

The staff at Memorial (like those at some other New Orleans hospitals) decided that the most able-bodied patients should be evacuated first, with the sickest patients held back for the final wave. That kind of triage structure has been extensively debated, but it’s not what concerns me here. What concerns me is the criteria the hospital used to decide which patients were sickest. Rather than carefully assessing each patient’s medical history and physical status, the staff sometimes used DNR/DNI orders as a crude proxy: If a patient had a DNR/DNI order on file, she was presumed to be in the sickest category.

That makes little sense. I know a few far-sighted, able-bodied fifty-somethings who have prepared advance directives asking not to be intubated or resuscitated if they ever become severely ill. I’m pretty sure they don’t want to be abandoned or euthanized after a natural disaster.

In a 2010 report on disaster planning, a panel of the National Academy of Sciences made the same point: “DNR orders reflect individual preferences and foresight to establish advance directives more than an accurate estimate of survival. Accordingly, DNR orders are not useful parameters for considering the allocation of scarce resources.”

Of course, the most important lesson is simply to be ready. Memorial, which was originally known as Southern Baptist Hospital, suffered severe floods in 1926 and 1927. But the memory of those floods faded, and the building’s emergency plans in 2005 turned out to be badly inadequate.

No reason to belabor this point here. Know your hospital’s disaster plan. Do some drills. If your building’s backup generators are still located in the basement, that’s a problem.

Don’t be too quick to give anyone up for dead. Fink ends her book with the story of Aarti Kinikar, a physician who worked in an overwhelmed Indian hospital during the H1N1 epidemic of 2010. When her facility ran out of ventilators, she had the inspiration to use modified CPAP machines on hundreds of small children. “Triaging better was not enough for her,” Fink writes.

Similarly, staff members at Charity Hospital refused to believe that their sickest patients couldn’t be saved or evacuated, and came up with ingenious plans to get them to safety.

I was at work last month on the day of the Navy Yard shootings. For an hour or so I was distracted, worrying about my sister, who at the time lived a couple of blocks from the base. I had to keep nudging my attention back to the tasks at hand: checking tacrolimus levels, preparing care plans. God only knows how my cognition might deteriorate during a severe disaster in my own building. But I hope I’ll be a little wiser for having read Five Days at Memorial.