“37 percent of U.S. physicians reported that they or a health care professional in their practice made home visits frequently or occasionally, compared to 70 percent or more in all the other countries.” [Health Affairs, December 10]

“He can easily arrange, with the stroke of a pen, to overtest and overtreat and hospitalize his patients, but it’s impossible for him to arrange home assistance or meal delivery.” [Health Care Renewal, December 5]

“[The Democratic establishment’s] love for policies that play well in focus groups blinded it to the revolutionary possibility of policies that are actually good.” [Libby Watson, December 6]

“Depriving staff of food and drink proximate to where they work is of no health value and strikes me as just one more way of exerting control over the people actually engaged in the hard, grinding work of saving lives.” [Edwin Leap, December 10]

“. . . one of us cared for a bedridden patient with chest pain who spent 47 hours in an ER hallway before a spot became available in the cardiac unit.” [Clayton Dalton and Daniel Tonellato, November 30]

“My view includes Cabell County, where there were just eight new HIV diagnoses a year for the past six years until late last year. Since then, 81 people have been diagnosed through the end of October 2019, with one to two new cases being recognized each week.” [Judith Feinberg, December 1]

“Women with a severe, work-limiting, permanent impairment are 20 percentage points more likely to be rejected [for disability benefits] than men.” [NBER, December 2]

“Doctors and other health care professionals have to decide whether the marginal benefits of a new drug or higher quality scan is worth the additional price. But if the new drug costs roughly the same price as the old drug and the highest quality scan costs just a few hundred dollars (the cost of the electricity and the time of the professionals operating the machine and reading the scan), then there is little reason not to prescribe the best available treatment. Patent monopoly pricing in these areas creates large and needless problems.” [Dean Baker, November 29]

“You price off what you can get, not what the thing costs, and it leads to massive bloat in our prices because insurance can’t do shit about it.” [Current Affairs, November 21]

“They refused to believe that I was in as much pain as I said I was in. Instead, they would gather their entire team of nurses and interns into my examination room to gawk. . .” [The Mary Sue, November 25]

“If he gets deported, he’d practically be lost in Mexico, because he doesn’t know Mexico. I brought him here very young and, with his illness, where is he going to go? He’s likely to end up on the street.” [Kaiser Health News, November 26]

“. . . the clinicians most likely to be involved [in medical errors] are nurses, who must straddle a thin line between doing no harm and doing the impossible.” [Houston Chronicle, November 14]

“The Americanisation of the NHS is not something waiting for us in a post-Brexit future. It is already in full swing.” [London Review of Books, November 7]

“If you’re sleeping in a public area, you’re more likely to be told that you have to remain sitting up. . . . Your fluids pool in your legs, and people end up with what’s called venous insufficiency and chronic venous insufficiency ulcers. Your skin just starts to break down from being overstretched for months or years.” [Slate, November 18]

“The unnamed doctor in Satel’s article was an employee of Purdue, according to an unpublished draft of the story. The study Satel cited was funded by Purdue and written by Purdue employees and consultants. And, a month before the piece was published, Satel sent a draft to Burt Rosen, Purdue’s Washington lobbyist. . .” [STAT, November 19]

Theresa Brown’s The Shift: One Nurse, Twelve Hours, Four Patients’ Lives is an account of one day in her life as an inpatient nurse on a hematology/oncology unit in Pittsburgh. The book is brilliantly executed. It’s a great portrait of one worker’s life-world, and it’s a great portrait of a hospital as an all-too-human institution. I hope it’s still being read twenty years from now.

To writers outside of health care, Brown’s material might sound like low-hanging fruit. How hard can it be, you might think, to put together a compelling book about twelve hours on an oncology unit? You’ve got life-threatening illnesses and exhausted, terrified family members. You’ve got nurses and physicians working under pressure. You’ve got a chronological hook. The stories tell themselves, right? 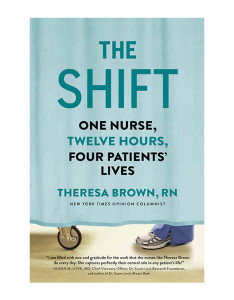 First, there’s the challenge of protecting patients’ privacy and dignity. Any stories nurses tell need to be anonymized. Genders, ages, diagnoses: all of those go through the rinse cycle.

At the same time, readers need to trust that the nurse-writer is telling the truth, even though she may have moved a few degrees away from nonfiction in the strictest sense. You can’t fudge. You can’t make yourself seem any more or less competent than you actually were, the patients any more or less stoic, etc., etc.

I can’t, of course, know with any certainty how well Brown has anonymized her patients in The Shift, or whether she has fudged her narratives in ways that matter. I can say that I have almost exactly the same job that she describes here, and I didn’t spot any failures of verisimilitude. On almost every page I thought, Yep. This is my world. And none of the book’s events seem to have been engineered to create a tidy narrative, to flatter Brown’s role, or to bludgeon a point into the reader’s head. It feels like life.

Next, there are challenges of tone.

If you write about some exceptional thing you did for a patient — catching a medication error, massaging a family conflict, spotting a potential deep vein thrombosis — you risk sounding boastful.

If you write about the frustrations of the job — understaffing, miscommunication, miserably designed software — you risk sounding whiny.

If you write about terminally ill patients, you risk sentimentality — or, worse, parasitically feeding on the suffering of others.

At various points, this book skirts the edge of all three of those pitfalls. But most of the time Brown’s voice is just right: low-key, attuned to concrete details, warm without being syrupy, skeptical without being cynical.

Finally, there are challenges of narration and explanation. This is where Brown’s book succeeds better than any nursing testimony I’ve ever read.

It’s possible to describe almost any other hospital role in two or three sentences, but bedside clinical nursing has evolved in strange ways. It’s a platypus. The job’s core tasks — physical assessments, medication administration, wound care, patient teaching — have been married to dozens of others. During any given hour, nurses need to be prepared to be something like a counselor, something like a housekeeper, something like an occupational therapist, and something like a physician’s assistant.

For a nurse writing for a non-nursing audience, here’s the problem: You can isolate and describe one element of the nursing role — say, the responsibility to do final checks to verify that a medication is safe to give to a patient. But even if you explain that element with perfect accuracy and clarity, you still won’t have conveyed much at all of what it’s like to be a nurse.

What is it like to be a nurse? It’s a deluge of obligations and stimuli. You need to be able to move rapid-fire from psychomotor tasks (changing a dressing, managing an IV infusion) to cognitive work (calculating and verifying dosages) to emotional labor (comforting a patient before a surgery that she might not survive).

What Brown does so well in The Shift is to embed her explanations of her patients’ struggles and her hospital’s structure and culture within an account of her subjective experience — her moments of exhaustion, curiosity, annoyance, her flashes of adrenaline.

Here’s a small piece of the book, chosen almost at random:

I used to love a comic book series called the Legion of Super Heroes. One of the super heroes, named Duo Damsel, often comes to mind when I’m at work. She could divide into two fully intact versions of herself just by concentrating. Maybe I could do that, too, if I tried really hard. Maybe just today — just this one time. If I really wanted it.

My phone keeps ringing. No matter how hard I concentrate, it’ll only be me here. I hit the talk button. “Medical Oncology, Theresa.” It’s the OR scheduler. Sheila’s set for 7 p.m. at the earliest. They couldn’t get her in any sooner. “We need the pre-op checklist done before she gets here,” the guy tells me.

Love the emphasis on before, as if I don’t understand that “pre-op” indicates “prior to the operation.” I want to respond with something clever and sarcastic, but I just say yes and hang up. What’s the point? He may be a rude SOB, or maybe he’s overworked like the rest of us, or both. I write down the OR number and then banish him from my memory.

Banishment from memory is one of the book’s recurrent notes. Brown isn’t sure how much it’s healthy to worry about her patients on the days when she’s off duty. If she puts her patients’ pain out of her mind during her civilian days, does that make her a little bit inhuman? Or is that kind of temporary forgetting necessary to stay sane as an oncology nurse? On another level, there is the constant moment-to-moment struggle to remember a thousand small tasks that need to be done on the unit: A cup of water that you promised a patient twenty minutes ago. Flowsheets that need to be finished. Bowel sounds that need to be checked.

The Shift isn’t perfect. There are moments of overripe prose. There might be a few too many literary references. Brown has weirdly little to say about nurses’ aides, who (at least in my world) can make the difference between a good and a bad day on the unit.

And Brown rarely says anything explicit about nurses’ attempts to step back from the deluge and to shape the conditions of their own work. There’s nothing here about hospital-level clinical practice committees. Nothing about unions.

But those are small flaws. For patients and patient advocates who are fighting for better, safer hospital experiences, The Shift should be a useful lens into the structures, routines, and incentives that shape nurses’ days, for better and for worse.

And for nurses like me, The Shift is an exceptional mirror of our work. I’ll be thinking about it for a long time.